Have you ever heard of the GMFCS (Gross Motor Classification System)? Most parents have not…although it is THE international standard tool used in both North America and Western Europe to assess clinical intervention in Cerebral Palsy.

The GMFCS is a 5-level classification system. Level 1 corresponding to mildly affected children, generally walking without restrictions, but tending to be limited in some of the more advanced motor skills. Level 5 corresponding to the most severely affected children that are very limited in their ability to move themselves around, even with the use of assistive technology. 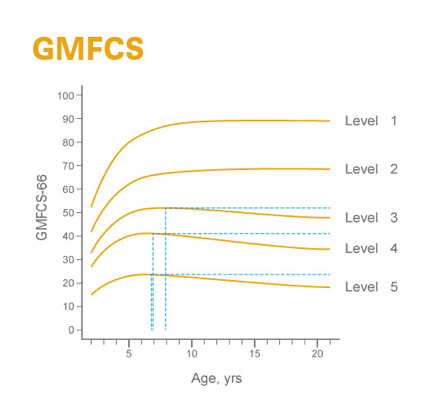 According to these curves, all levels of severity demonstrate the same phenomenon that is characterized by a discontinuance of functional improvement by the age of 9, with the most severely affected individuals (level 3, 4, 5) showing diminishing curve benefits and progress as early as age 4 or 5.

All levels of severity taken together show the same phenomenon after the age of 9 and some demonstrate this occurrence even earlier. In the most severe cases, levels 3-4 and 5, there are diminishing curve benefits and progress after the age of 4-5 years old.

The GMFCS study speaks for itself. Professionals, in spite of all their efforts to improve the fate of children with Cerebral Palsy, often refer to this phenomenon as a curse: ‘We can’t beat the curve!’ It’s an expression frequently used in conferences by healthcare professionals.

In other words, poor structural qualities lead nowhere in terms of function, regardless of the intervention used to target their maximization.

But, here is the good news!

ABR completed a 3-year prospective cohort study developed to assess the influence of ABR therapy on the quality of life, wellbeing, and function of a child with cerebral palsy.  This study included over 100 participants, mostly GMFCS types 4 and 5 (most severe cases), from both the US and South America and demonstrates, with statistical significance, the beneficial results provided by the therapy. 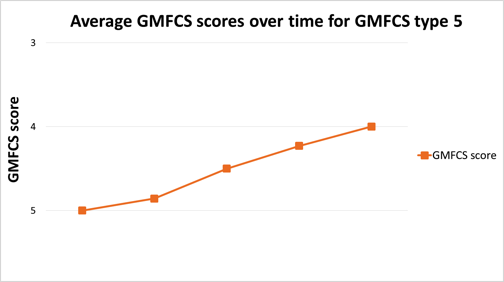 Results found in the below graph summarize how the GMFCS classification actually improves from a score of 5 to 4 for patients having conducted the ABR therapy for 2 years (GMFCS level 4 suggests significantly more functional capabilities than level 5). This is the first time a therapy not only demonstrates consistent results, despite the age of the child, but actually beats the curve, or the ‘curse’ so often deplored by professionals. Children categorized level 5 (the most severe level) had to be re-classified into level 4 in view of their new functional abilities.)

The evidence has now been scientifically proven: musculo-skeletal structure must be addressed and improved before proceeding to any training technique.

Cerebral Palsy and Coronavirus. Wheelchair to and from- transfers are total-body exercise!

Coronavirus Confinement Response – An Open Letter to the ABR Families.

Coronavirus Confinement Response – An Open Letter to the ABR Families.